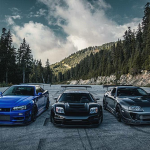 "Greetings! I'm Studz, and welcome to my profile! I'm ranked #4 on this wiki at the time of writing, i'm a huge Nissan fan, my dream car is a Z32 300ZX/Fairlady Z, and i'm considering bringing back my Youtube. If you need wiki help, in-game help, or want to learn about cars, message me on my wall!"

Not going to put in the ingame names in due to the renames.

Only applies in-game, in real life, they are both GT cars and the R35 is slightly faster

Retrieved from "https://vehicle-simulator-roblox.fandom.com/wiki/User:StudzYT?oldid=30461"
Community content is available under CC-BY-SA unless otherwise noted.